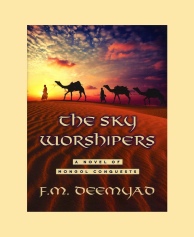 Praise for The Sky Worshipers

“The Sky Worshipers is a feat of imagination that gives a window on people and places we didn’t know, with a depth of character we didn’t realize was possible. Names we may recognize as a dot on a Silk Road map come alive with dramatic power.”

“The author's in-depth research is evident throughout The Sky Worshipers. For readers who enjoy a lush blend of historical fact and fiction, this novel details the smells, sights, sounds of a pivotal era in time, uniquely told through the eyes of three captive princesses.”

Gina Wilkinson author of When the Apricots Bloom

“F.M. Deemyad immerses the reader into the 13th Century world of Genghis Khan. It's an unforgettable story of survival and strong women as we experience life through the eyes of the conquered-and the conquerors. In The Sky Worshipers, history comes vividly alive.”

“In this stunning saga, F. M. Deemyad takes us on a thrilling journey as Genghis Khan and his sons sweep across Asia and Europe, worshiping the sky while they conquer one nation after another and capture women to enslave and marry. The women's stories, rich with architectural, historical and cultural detail, hold an important message for all of us who have inherited privileges as the result of our ancestor's atrocities. A great read and a phenomenal debut!”

Raima Larter, Author of Fearless and Belle o' the Waters

“The Sky Worshipers by F.M. Deemyad draws us into Genghis Khan's conquests through the eyes of three women ripped from their homes and thrust into royal service. This lyrical novel is a vivid imagining of hearts and minds of women who left their marks on history, despite history's failure to acknowledge their contributions. It allows us to connect with timeless striving for a world of compassion, equal opportunity, and celebration of diversity. A beautiful novel.”

“An illuminating telling of Mongol conquest and the people who lived-and died-making decisions that shaped half the world. The broad strokes of time are revealed through the perspectives of single bristles of the brush. Cleverly imagined and carefully rendered, The Sky Worshipers is an engaging, personal look at one of history's momentous eras.”